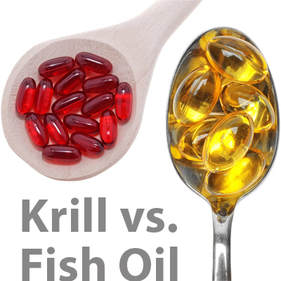 I am asked this question all the time: what do you think about krill oil? Is it a better choice than fish oil? My opinion is no… and here’s why.

Krill oil and fish oil both supply the beneficial omega-3s EPA and DHA. And companies often taut the enhanced bioavailability of krill oil because it supplies omega-3s in phospholipid form, which they argue enhances the uptake of EPA and DHA. There are some studies that support this claim, so as a nutritionist, why don’t I switch my loyalties from fish oil to krill oil?

In the short term, krill-derived omega-3s may have better uptake, but over a period of weeks or months, the fish-oil-derived omega-3s reach the same levels. And that’s the real issue. Where will our omega-3 levels be after long-term supplementation? They’ll be almost exactly the same. BUT (and it’s a big but) the fish oil customer spent far less money to get there.

Compare the cost of a 1,000 mg dose of EPA and DHA from krill oil to the cost of the same dose supplied by fish oil. Krill is much more expensive – sometimes more than double. And beyond expense, we must consider the environmental impact of over-harvesting. Krill is a major food source for whales, seals, penguins, and squid. It’s concerning to disrupt the food chain in such an unnecessary manner. I feel we should leave the krill for the many species that depend on them for survival.

Studies that fairly compare omega-3 forms show that whether you use a fish, krill, or algal source, the dose needed to reach target omega-3 levels is the same. There is simply no justification for spending more than you need to in order to raise your omega-3 levels to the ideal Omega-3 Index target of 8 percent.